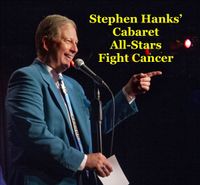 Hidden Cabaret (at The Secret Room), Behind the Cooper Door, 707 8th Avenue, between 44th and 45th Streets., New York, NY

Charlotte Patton was an actor, singer, comedian, and beloved member of the New York Cabaret community who performed shows that earned her MAC and BroadwayWorld.com Award nominations. Patton died in January 2018 at age 70 after a two-year battle with melanoma that had developed into a very aggressive cancer. On March 10, 2018, Patton’s friends celebrated her life with a memorable cabaret show at the United Methodist Church of St. Paul and St. Andrew in New York, where Patton had been an active member. Her great friend and publicist Stephen Hanks Produced and Hosted that memorial show and now, two years to the day, Hanks will again produce and host a variety show in Patton’s memory, this time a fundraiser for cancer and featuring his Cabaret Life Productions clients, many of whom Charlotte loved as friends and fellow performers.